Type in keyword to search

The North always seemed to be portrayed as somewhat being surrounded in a cold environment leaving you with shivers and a cold shoulder perhaps? Well, with regards to the climate it is in fact true but because of its chilly atmosphere our taste buds would definitely crave for something soft, something hot, and probably something in between.

Exploring Northern Thailand would surely be a wiser decision for a taste of authentic Thai Culture than of the crowded and westernized South. Historically, Northern Thailand is the birthplace of the first Thai Kingdom, the Lan Na or Lanna Kingdom which translates to the “Land of a Million Rice Fields”. The Northern region of Thailand is situated at the crossroads of several civilizations and cultures, traditionally representing different ethnicities such as Lao, Burmese, Shan, southern China’s Jin Haw, Hmong and Karen. Imagine what a crazy ethnic mix along with its various histories all honing together that is the unique Cuisine of Northern Thailand better known as Lanna Cuisine.

Fun Fact: The Lanna Kingdom has been a casualty of 262 years on the first period and 158 years on the second period under the Burmese Rule.

Northern Thai Cuisine’s history and its ongoing evolution is a taste of both mellow yet intense flavors, like having a conversation of both the past and the future, giving a message on the first bite and receiving a response on the second bite. Expect a lot of fresh vegetables, aromatics, lemongrass, shrimp paste, fermented soybean discs, fresh and dried chilis, giving some of their dishes a sinking depth of flavor and the ever loved herb-rich curries! On cooking methods, northern Thai cuisine is known for using fire not just only for the source of cooking the food but also grilling and smoking them while the process adds more aroma and umami to their dishes.

In Chiang Mai, a city and was once the capital of the Lanna Kingdom, lies a lot of restaurants and food stalls that serve an array of northern Thai Cuisine dishes. Usually some backpackers and locals would hit those night markets and food stalls but fortunately I have stumbled upon one highly rated restaurant that serves authentic Lanna food: Tong Restaurant and Bar Chiang Mai or Tong Tem Toh. Table reservations are not a part of their protocol so you better buckle up of a queue from the opening ‘til late at night but worry not because your patience will really pay off when your food gets on the table!

Tong Tem Toh has a good socializing ambience with fresh open air and an aromatic smoke lingering making you hungry. They offer a menu in Thai with a simplified English translation. Alongside their food are good choices of beers, mixers and cocktails from the accompanying bar.

I know, I know. It does not sound appetizing at all. I thought the same when I heard it.

Originally from Vietnam, fermented pork has reached its neighboring countries including Thailand, thanks to the Vietnamese immigrants. It’s usually cooked with other ingredients or is eaten as finger food during a drinking session. In Tong Tem Toh, it was one of the most raved dishes so naturally I had to try it.

It is now one of my favorite things in the world. I never knew sour sausage existed and I think it’s such a genius creation. I do, however, think it can’t be eaten on its own. I think eating plain steamed rice with it helps balance out the boldness of the sour pork sausage.

If there’s something you have to try in Thailand, it’s Chiang Mai Sausage or the Sai (intestine) Ua (to stuff/fill). It is an explosion of flavors with herbs, spices and curry paste they include in the stuffing.

You can easily buy this off of the street food stalls anywhere in Thailand because it’s become so popular it’s spread from the north to the rest of the country. 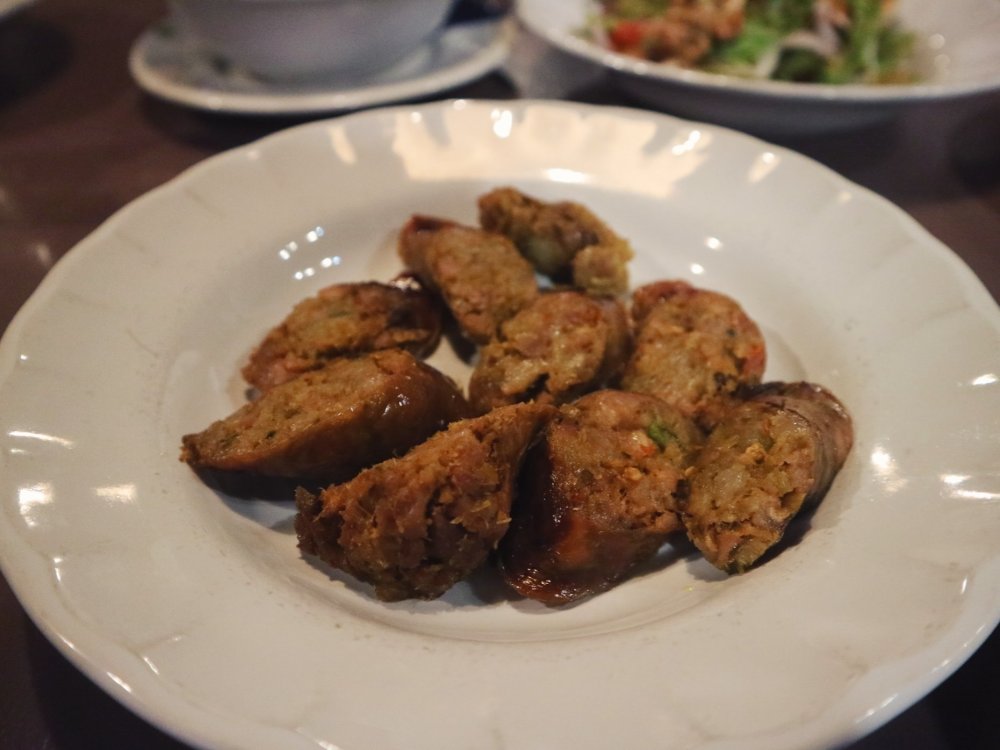 I didn’t even know what Burmese cuisine is like but it’s highly influenced by its neighboring countries — Thailand, China, and India. I’m not even sure now how the Burmese curry came to life because Thailand has their own version of curry and so does India. Maybe they combined the best of both worlds and made Burmese curry? This was definitely one of the best curries I’ve tried.

Try out the restaurant for yourself and tell me what you think! There’s a lot more options in their menu but I sincerely hope you try my top three favorites! And I hope the flavors dance in your mouth and that you enjoy your experience as much as I did.